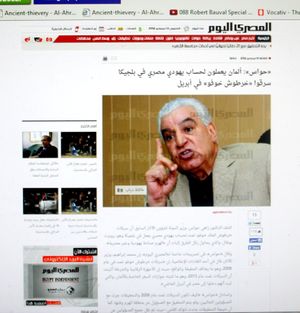 Dr Zahi Hawass, ex Minister of State for Antiquities, revealed that the robberies of King Khufu’s cartouche was done on behalf of, Robert Bauval, an Egyptian Jew working in Belgium, who has been trying by every means to prove that the pyramid is ‘a Jewish and not Egyptian product’.

Hawass said in a special statements that Muhamed Ibrahim, the Minister of Antiquities has said in one of his media interviews that Khufu’s cartouche head was stolen in 2006, which is not true, as the inspecting agencies and the police have proved that the robbery took place in 2013, and the passports of the Germans showed that they entered Egypt last April.

Hawass wondered ‘how the theft could have taken place in 2006 while the investigations were conducted with current officials and not those responsible for the pyramid area at the time? While the investigation result came to confirm my words, and all those responsible for the crime have been removed from the pyramid area after their involvement, one way or the other, has been proven’. He added: “I would like to make it clear that the foreign vandals are led by an Egyptian Jew living in Belgium, who had previously sent more than one person, who were all forbidden completely, and with whom I have had many battles, and he wrote a book before trying to prove that the pyramid was not Egyptian”.

Hawass confirmed that “it was not permitted to enter the pyramid except through tourist companies in order to make control, which is the opposite of what is happing now; which allowed the samples to be smuggled”. He [Hawass] pointed that “the German laboratories attempted to demonstrate, through the red colour found in the rooms, that the pyramid dates to 15 thousand years (ago), which means that this was the time it was built, but the fact which is confirmed by both Egyptian and foreign scientists is that Khufu sent in his Year 27 a mission to bring the red colour from the Western Sahara, from Mast stone in which the cartouche was written, which means that it was the quarry from which the colour was brought who dates 15 thousand years ago and not the pyramid”.

He [Hawass] stressed on “the need for those responsible for antiquities to look to what is happening of destruction and vandalism in some areas, not just remove accusations from officials or trying to deny responsibility for a great disaster like breaking into the pyramid and stealing Khufu’s cartouche, as the present minister does”.

Source of translation and illustration: