Dr. Horst Friedrich and the rediscovery of generalism in science 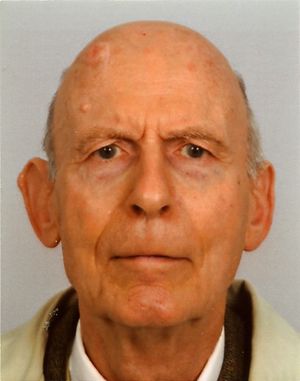 The appreciation of the lifework of a great scientific expert is a challenge for anybody who intents to undertake it. All the more so, if the person in view is a an important generalist, who has made an extraordinary contribution to acquaint the younger generation of alternative, non-mainstream scholars with the urgent necessity of multidiciplinary, interdepartmental thinking and studies, and to develop a deeper understanding of science, its possibilities and limits.

This is especially true in respect to the complex field of the study of history of earth, mankind and civilization. In this field he has been more then able to connect the many red threads of his lifework, to form a comprehensive, serious alternative 'Weltbild'. Furthermore – in clear distinction to the overwhelming majority of establishment expert-scientists – he has based his omnia opera on a firm foundation of qualified reflections in the fields of theory and history of science.

As a graduate historian of science – Horst Friedrich has received his doctorate in this field under Prof Dr. Joachim Otto Fleckenstein at the Technical University of Munich in 1974 – he at an early stage in his research work had to realize deficiencies of today´s, institutionalized and over-specialized science. For certain dogmatic tendencies in universitary research he has in 1989 invented the term 'Neo-Scholasticism', which he described as follows:

“It is the method of Neo-Scholasticism to view the world through th filter of the paradigmata, conglomerations of academic doctrine, accepted as valid for a certain time. These can – self-evidently – only be arrived at by a selective view of phenomena. Neo-Scholasticism is mistaking science, as it were, for a cupboard with drawers, which have been lettered long ago, wherein rests more ore less fixed >knowledge<. There one abhorres de facto the underlying unity of all science and interdisciplinary research [...] True science will again and again question the paradigmata so dear to Neo-Scholasticism and try to arrive at a better approximation to truth." [1]

So the obvious fact of the overlapping of all sciences, as Friedrich has called it not only in “Einer Neuen Wissenschaft den Weg bahnen!” [2], one of his most important works, is a key statement, the laureate uses to challenge a kind of, as the present author would like to call it, “institutionalized overspecialization” at our universities. Therefore Horst Friedrich again and again has laid stress upon the necessity of reevaluating generalism in scientific research, which for many decades has been neglected in favor of specialization. In 2009 he stated:

“The >specialist< in one field most often has only very little knowledge (if any at all) of what his >colleague< in one of the other fields does, thinks or >knows<. Even worse: in that system of compartmentalization of knowledge,” each field “has several, or even many, sub-fields. And the >specialists< we find today pronouncing in the media about this or that (Diffusionism, Darwinism, Catastrophism, evolution of mankind etc. etc.) are most often knowledgable, i.e. real specialist in only one of those [...] fields of knowledge. Under such circumstances it is of course obvious that statements by such kind of specialists can pose a problem. That does not necessarily mean that their contribution has to be worthless or irrelevant with respect to the problem at hand. [...] But, being specialists for only a relatively minor sub-problem, whereas research problems with respect to cultural diffusion are often of a far more comprehensive interdisciplinary nature, they cannot be expected to deliver more than one puzzle stone for a far greater jigsaw puzzle.” [3]

Furthermore, Dr. Friedrich has never had any needless qualms to reject doctrines and paradigmata of specific sciences. On the one hand he did that, because those scholarly opinions were – from his point of view – contradicting the observable evidence (let me, for example, mention his repudiation of the theory of the 'great ice age' [4], or his dedicated refusal of the scientific myth about the existence of “human races” [5], which as a matter of fact clearly predated respective change of paradigm among todays anthropologists). On the other hand he had to reject those opinions, because of his axiomatic reasons, mentioned above. Science, once constricted in a corset of paradigmata, will always develop a tendency towards dogmatism and an overreliance on a so called “assured view of the world”.

He contrasts the academic practice of censorship and the attitude of “not invented here” by saying: “We have to learn the lesson that it is not enough to accept scientific pluralism only occasionally - so to speak condescendingly -, but instead we will have to institutionalize it. A promising way to realize that would doubtless be to install one and the same field of research at the same time in two or more universitary departments or faculties. There one would be able to take alternative scenarios as a research basis. [...] For far to long an institutionalized >university of ordinaries< has retarded the advancement of sciences.” [6]

One of Dr. Friedrich´s many achievements doubtlessly is the integration of Oriental and Far Eastern philosophies into the realm of modern scientific research, superseding an old-fashioned and outdated Eurocentrism. He again and again has – equally astucious and eloquent - criticized that modern science is in the grip of a simplistic materialism.

Of major importance, too, is his consequent exposure of highly dubious phrases and shibboleths, like “positivism” and “exact sciences”, which belong to the “display of modern universitary science”, as Friedrich says. All in all the use of such formulas is nothing but a means to an end, in order to segregate disliked approaches or whole fields of research (e.g. serious astrology and alchemy, two fields, the laureate has studied for many years in depth, vehemently defending them against unqualified and flippant criticism. [7]).

Thus it won't come as a big surprise that as yet Horst Friedrich´s works and the results of his extremely productive research have landed on fertile soil mostly offside the scientific community, the more so as he always has been a powerful defender of deviant “heretics” (especially pioneers of Diffusionism and Neo-Catastrophism), meaning outstanding personalities of alternative scientific research, which are often stigmatized by dedicated followers of the academic mainstream, calling them “pseudoscientists”.

À propos of “pseudoscience”. As a forceful defender of the freedom of thought and research, and as well based on his authority concerning history and philosophy of science - which is enabling him to understand science as “collective states of consciousness” in which everything “is in a constant state of permanent evolution, fluidity and eternally provisional condition” [8] - Dr. Friedrich has not only consistently refused the use of this unscholarly and dubious term, but moreover he has harshly criticized its abuse by members of ideologically agitating groups, like the so called “skeptics´ movement”.

Especially the systematically developed synthesis of diffusionist and catastrophistic ideas – another red thread, which is characterizing Horst Friedrich´s opera omnia, which only could be described here in some aspects, but not at all in its entirety – have made his decades-long studies, research and consolidated findings both highly valuable and inspiring for beginners and for senior researchers.

Anyway, it won´t be an indecorous exaggeration to call Dr. Horst Friedrich here and now the 'Nestor' respectively 'Grand Old Man' of Diffusionism and (Neo-)Catastrophism in the German speaking part, whereupon the occasion of this honoric speech makes it clear enough that his works, not least comprising many publications in English language, have 'diffunded' into the Anglo-Saxon language area, where they as well have been received with interest. On this note, this laudator would like to express his urgent desire that especially Dr. Friedrich´s key works – first and foremost his “Einer neuen Wissenschaft den Weg bahnen!” and his late philosophical work “Traeumer und Traumwelten” [9] - will finally be published in English language, too.