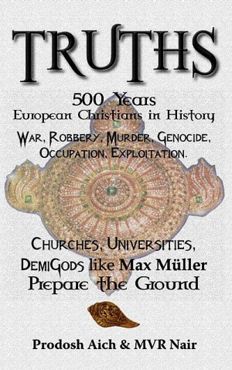 TRUTHS is an extraordinaryly interesting and thought-provoking book. It should be easily accessible in every reputable public library at least in Western countries or, better still, worldwide. But TRUTHS is also an unusually provocative book. Even in a twofold sense.

On the one hand it is provocative with respect to the relationship between Western Europe and India during the last 500 years, vide subtitles like "War, Robbery, Murder, Genocide, Occupation, Exploitation" on the title page. On the other hand it is a harsh critique with regard to the well-organized indoctrination of India's population with so called "western values" (Christian sects and missionaries included) and the general Western world-view.

TRUTHS is also highly critial of the role, which organized Western science (from comparative linguistics to cosmology) has played in this respect, vide subtitles like "Churches, Universities, Demigods like Max Müller prepare the ground" on the title page. It is to be expected that, because of this, the "famous", stubbornly-doctrinaire, so-called "Skeptics" movement will probably attack this book as "unscientific". But this would be utter nonsense. As a historian of the sciences [1], and having been vividly interested in the philosophy and sociology of the sciences [2], I can only state that this truly extraordinary work, allegedly only about "Sanskritistics" and "Indology", is of exceptional interest and merit.

Luckily I have been able to acquire, as an indispensable prerequisite to be able to participate in the debate, to wit a rather good knowledge of India's unparalleled scientific-plus-spiritual heritage as found in the Veda/Upanishads and Mahayana Buddhism. Last but not least the vast fields of an obviously millennia-old ethno-linguistic diffusionism has been, for decades, one of my main fields of interest, including the role ancient India may probably have played in this respect. [3]

Quite obviously and naturally, with said background accumulated over several decades, it cannot possibly have escaped my attention that many of those so-called "authoritative", "scholarly" pronouncements on this or that aspect of India's age-old civilization, emanating from Western academic institutions and authors, were and still are, of a rather dubious quality.

In this respect I fully concur with Paul Feyerabend's critique of the role establishment science is playing today. [4] To take only one example: a serious discussion of India's ancient shipbuilding and seafaring activities - cotton e.g. was brought to Peru from N.W. India in prehistoric times [5] - is practically non existent. It is not the least merit of TRUTHS that it reminds us to be distrustful towards the continuous ideological "propaganda", emanating - via the media - in the guise of allegedly objective science. It is especially in this respect that I heartily welcome this meritorious book, to wit as a very necessary antidote against what in German is called "Schulwissenschaftsgläubigkeit", i.e. childlike or puerile trust in "Weltbild"-relevant pronouncements made by establishment science.

It is of really great merit that this book (for the first time, as far as I know) we find a realistic description of the alleged "competence" of those Western "Sanskritists" and "Indologists" of about 1600-1900, among them not the least the famous F. Max Müller from Dessau, who, in the author's scenario, had been a paid collaborator of the British East India Company. In the author's scenario said company (but also the other Dutch, Portugese and French "pirates" attacking India then, seizing Indian territories play a rather sinister role.

That may have been so, on the one hand, no doubt. Being myself a kind of a Taoist, I tend to regard those remarkable interactions between European powers and the Indian subcontinent during those centuries as somehow, so to speak, unavoidable manifestations of the "Tao". This is the first and main difference between TRUTHS and this reviewer. If we could attribute intent/design/aim/purpose to the "Tao", we might perhaps speculate if not the whole exercise had only one aim: namely to establish intense contact.

The second point, on which the reviewer tends to disagree with TRUTHS the problem of "science" during the 19th century. The authors describe in interesting details, how these mostly young men of the 19th century in Western countries tried to become "Sanskritists" and "Indologists". Obviously they seem to have been unable to acquire the necessary competence. Even worse, as time went on, "comparative linguistics" became a "science" at our universities , without ever being able to establish a sound scientific foundation for this "science". This has to do with the history and sociology of the sciences.

Modern "comparative linguistics" took its present form mainly during the second half of the 19th century. We should perhaps not expect too much from "scholars" or "scientists" of that time. It was the time of Napoleon III and Bismarck, of Darwin and Lyell, of Karl May and Karl Marx, of Queen Victoria and king Ludwig II of Bavaria, of H.P. Blavatsky and Mary Baker Eddy, Maxwell and Trotsky, Kaiser Wilhelm II, Freud and F. Max Müller.

Though lip-service with respect to "science" (cf. "Christian Science"), much of the "sciences" of that time left much to be desired. Not only in the field of "comparative linguistics"! Marxism and Darwinism come to mind, allegedly "sciences", too. It is e.g. becoming more and more obvious that the Darwinian theory of "evolution" belongs perhaps more to the field of "charlatanry" than of "science". The same can be said of "Lyellism", a version of geology which denies the former existence of a catastrophic or cataclysmic past of mankind. Or think only of the theories and speculations about "electrical" phenomena and magnetism.

Let these examples suffice. In other words: It would have been an almost unexplainable miracle, if, in that quasi-"scientific" climate or "atmosphere", of the 2nd half of the 19th century, "scholars", like F. Max Müller etc. would have been able to create a true science of "comparative linguistics" or "Indology".

One Problem remains, which causes me headaches. From this meritorious work TRUTHS, it has become absolutely clear that Western "Indologists" and "Sanskritists" were unable to really understand the contents of those "Sanskrit" works, of which they pretended to be able to divine, quasi word-for-word, the contents. After having read TRUTHS, I am convinced that they were unable to do so.

How then has it become possible at all that, immediately after 1900, we do find high-quality translations from Sankrit e.g. in the form of Paul Deussen's SECHZIG UPANISHADS DES VEDA (Leipzig 1905) and VIER PHILOSOPHISCHE TEXTE DES MAHABHARATAM (Leipzig 1906) and then, e.g. in 1934, we have already the high level of understanding Sanskrit as shown in W.Y. Evans-Wentz' TIBETAN YOGA AND SECRET DOCTRINES.

Could it be that Sanskrit texts were only really available for Western scholars, when they began to get into contact with the Tibetan tradition? Tibetan scholars were absolutely familiar with Sanskrit. And they were absolutely part of the Indian Mahayana tradition. I feel more research is needed in this field.