The birth of Venus out of Orion (V)

In Egypt the Nile was projected up into the sky as the River Eridanus, but also the Milky Way could have been this river. Eridanos is the legendary river of the northern West. Osiris (Sirius-Venus) was travelling down this river. Eridanus is especially and foremost connected to the Phaethon legend, Phaeton being identified by Velikovsky as the raging Venus. Von Scheffer writes in 1939: "To get further into the matter, on what kind of horrifying cosmological world event this Phaethon legend is based on, in an unimaginable past with horrifying memory, shall not and is not allowed to be investigated here; beside this, the research, and probably also the statements about it, are not quite ripe yet for the outrageous realization". This statement again shows that Velikovsky is right on target. As the global community is bombarded with Hollywood and real life horror daily, the world should be ready for the news by now, but probably the statements aren't ready yet.

In the drawing from Largo Canyon (Fig. 16) the hourglass symbol of the younger 'War Twin' Born of Water / Venus is decorated in conventional interpretation, with an "unusual sash", which to me represents the river Eridanus. Also on the Egyptian lions this sash is found next to the Orion-Venus sign. The rosette is the sign of Venus (Rix 1983: 5, Heinsohn 1981: 5). (Fig. 17)

The Babylonian representation of the goddess Inanna / Venus resembles the Orion-Venus sign, too, decorated beautifully with Eridanus or a comet tail (Ginenthal 1994) (Fig. 18).

I find it quite interesting that Orion, the wild hunter, is identified as the Sky Mother Berchta in old germanic lore. This certainly opens up another avenue of interessting possibilities in the identification of female goddesses. Perhaps Sky Mother Berchta became Sky Mother Maria, out of whom Jesus / Zeus / Venus was born. To our ancestors the star came slowly out of nowhere, that might be the basic idea behind the immaculate birth. (Fig. 19) 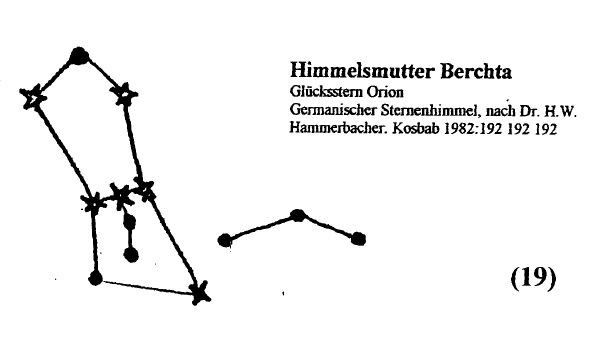 From this I derive that our ancestors have not seen the actual birth of Venus out of planet Jupiter. Velikovsky did interprete Marduk as Jupiter-Zeus. But there exists also a Marduk-Orion. Marduk should rather be another name for Orion. From the head of Jupiter-Orion appears the star Athena / Venus. The area of the head resembles the area of the star, that the Egytian Sahu / Orion is holding in his right hand. And there is the possibility that Marduk-Mars in Orion fights Tiamat-Venus. 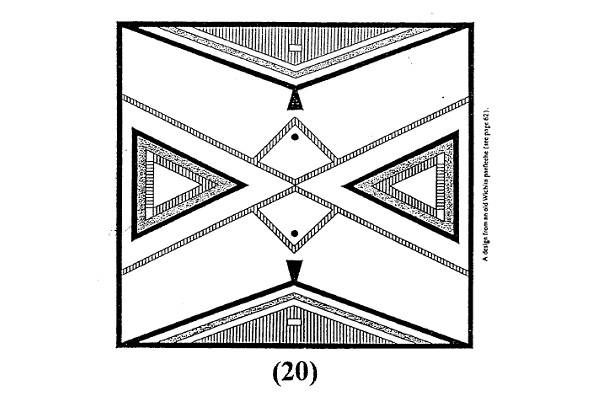 If one turns the Orion / Venus sign on the Wichita parflech (Fig. 20) to a horizontal position, it resembles very much the form of Shivas drum (Fig. 21).

I find it highly interesting that the somhow clumsy form of Shivas drum is equivalent to the clumsy form of the parflech design. Shivas drum was also made from two sculls, which reminds of the twin motive. Also the Mesoamerican ball game court reminds in its basic outline of the hourglasss, even though distorted (Krickeberg 1948:137}) (Fig. 22). But this may be due to the necessities of a ball game. If one would build it according to the original form, it probably would not make much of a game, with a narrow girtle right in the middle of the field. As these ball game fields, especially the sacred game places of the gods, were symbolizing the night sky, or were called ballgame fields of the stars, there seems to be some convincing logic to connect their form to Orion / Venus. Especially if one considers that these games were the reenactment of cosmic catastrophies, caused by Venus. (Velikovsky 1950, Knaust 1994, Peiser 1995) 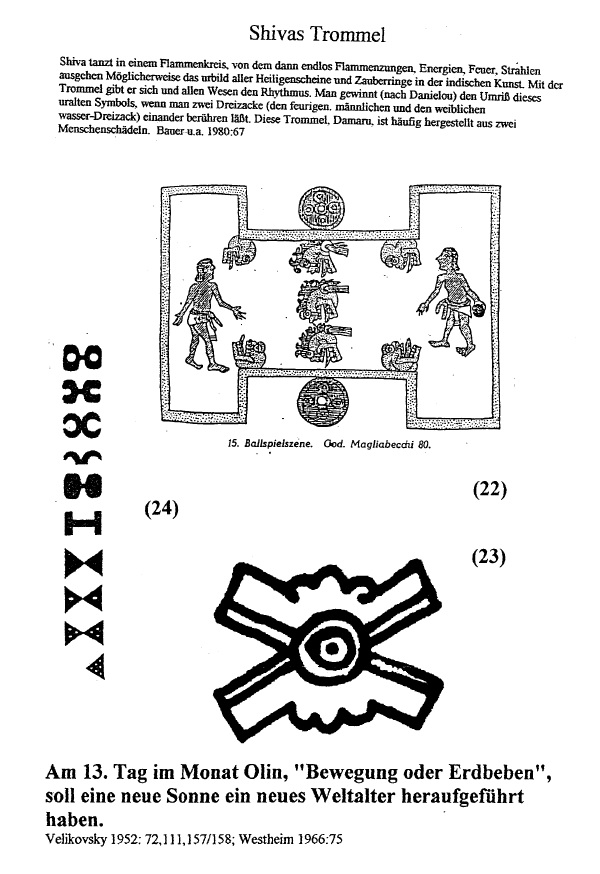 Another important connection in this line of argument is the glyph Olin (Fig. 23), which again resembles the hourglass Orion / Venus (Westheim 1966:75). Even in the numerical build up of the glyph and the ball game field we'll find similarities. The Aztec word olin / ollin means movement. On the 13. day in the month Olin, "movement or earthquake", a new sun brought about a new world age (Velikovsky 1950, 1978: 72,111, 157/158) This new sun was Venus. The new moving sun was probably represented by the ball, called by the Mexica (Aztecs) olli (Knaust 1994: 70). That the comparison of these two forms is legitimate, is verfied by the successive stages of double water gourd designs as they are presented by Lumholtz (1904) (in Patterson 1992: 206) (Fig. 24). The hourglass and the double bow motive from New Mexico both represent the 'War Twins' in Navaho mythology (Patterson 1992: 17; Wellmann 1976: 94), who both can be connected to Venus. (Fig. 25)

According to Washington Mathews the hourglass represents the scalps of the enemies. In the Pueblo Hano, Tewa village on the Hopi Reservation in Arizona, scalps were called Morning Star, and were washed when the Morning Star was rising. The Morning Star was a war sign. (Wellmann Ibid.: 80, 94) As comets were called "hair-stars" in various cultures, this fits the scheme, too. The bow-motive is connected to the lightning and thunder complex. The weapon of Motseyoef / Venus was a lightning-lance (hohnuhkawo), which had the form of a thunder bow (Fig. 26). In this lightning-lance the spritual and physical power of lightning could accumulate. 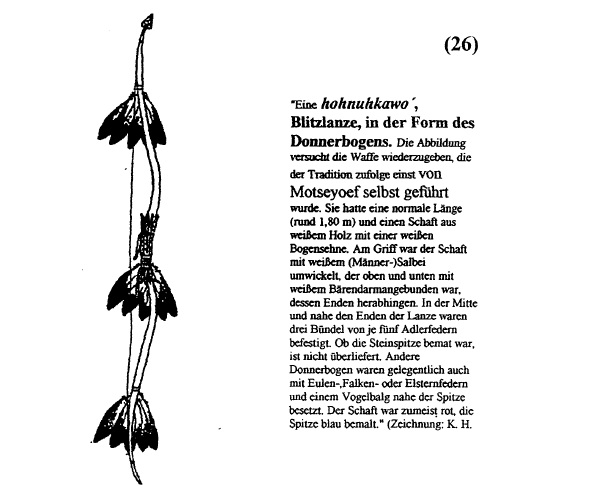 Later, men known among the Cheyenne as Contraries (hohnuka) carried this bow, but there were only two or three of them at the same time. (Schlesier 1985: 34,102-103) A Contrary had no fear of being struck by lightning. These bow-lances were sometimes called thunder bows, because they had the power to influence the thunder, that is the lightning. The spiritual power of this lance was very great; it was one of the most potent medicines of the tribe, handed down from long ago. It was proper for the Contraries to repair and renew their lances at the same time the four medicine arrows (Venus) were renewed.

"When lightning flashed four times and acted as a man to beget Child of Water, White Painted Woman, (the Sky Mother), conceived and bore Child of Water, a deified culture hero analogous to Quetzalcoatl, the Toltec and Aztec hero and maker of the Mexican Golden Age which would yet return" (Collier 1949, 1962:134). Also the Cheyenne had a period of a non cultural Golden Age in the very beginning, were humans and animals could understand achother, but this was way before the star Venus appeared. Child of Water thus is described as a god of the middle distance. Considering his time of appearance in Tsistsitas history Motseyoef / Venus can be called a god of the middle distance, too. In Maya mythology Quetzalcoatl and, or the twins, appear in the historical middle distance, not at the beginning of time. So I assume that Osiris and Shiva are gods of the middle distance, too, and the same should be true for the Toltec and Aztec Quetzalcoatl. 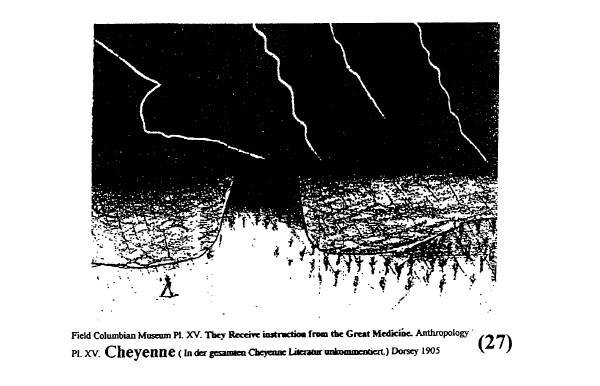 In Dorsey (1905, PL XV.) a drawing is included which was made by an old Cheyenne. It shows four lightning beams in front of a black sky, its title: "They receive instruction from the Great Medicine." (Fig. 27)

These four lightning beams are synononymus with the four Sacred Arrows of the Tsistsistas, which Venus brought to them. On the drawing, two lightning beams are kind of similar in appearence, the other two are distinct from eachother. Perhaps the appearence of the Venus was accompanied by four visible energy rays, which were standing in the sky for a longer period of time, at least long enough to be observed in different parts of the world, like in Spain.