The birth of Venus out of Orion (VI)

The four Lightning Arrows of the Tsistsistas have flint points and represent the power of the thunder. On each of the four arrows are painted figures of the world, the blue paint meaning blue heavens, the sun, the moon, stars, the red paint meaning earth. The two Buffalo Arrows are red and the two Men Arrows are black. The Arrow Bundle contains another spear point: it was brought with the arrows. It is the most dangerous thing in the bundle. It represents the most powerful of all things; and it has power to bring knowledge to a human being. The spearhead guides everything. (Schukies 1993: 204, 205) This spearhead might be the representation for a central lightning flash, either a real one, or it might rather be a representation of the whole phenomenon of lightning which accompanied the Venus-event. This Lightning Spearhead and the Lightning Lance probably belong together. 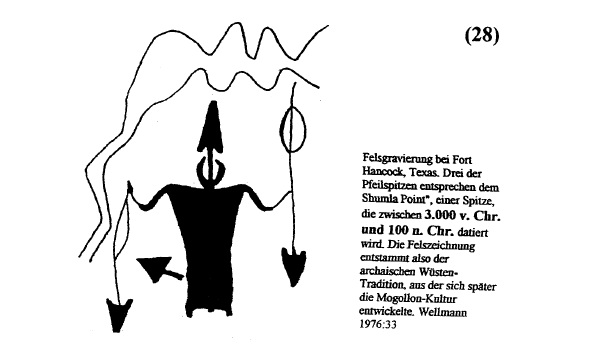 The Lightning Lance was perhaps shot off with the Lightning Bow. The four Tsistsistas arrows are the representation of Motseyoef / Venus and the legendary Two Men / Venus, who together form a variant of the Venus-trinity. The lightning-flash from the Lightning Spearhead is probably the same lightning-flash that Zeus / Venus was throwing, when he appeared in mythology. Also the Sky Mother Mary conceived and bore her son Jesus through the Holy Spirit, the flash of lightning.

In the rock encarving from Fort Hancock, Texas, these four lightning-flashes are thrown by a huge horned figure, who's body is resembling the hourglass Orion. (Fig. 28) He stands right beneath the Milky Way, where the constellation Orion is situated in the night sky. This figur might also be interpreted as a North American variant of a Jupiter / Orion throwing the lightning ball Zeus / Venus. In Cheyenne mythology Motseyoef / Venus is the one and only Lightning god and Carrier of the Thunderbow. His signs are the lightning-flash, four beams of lightning, and the legendary Two Men. 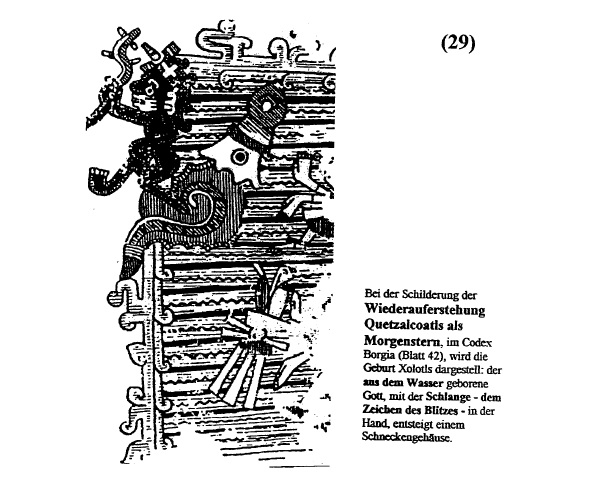 In the description of the resurrection of Quetzalcoatl as Morning Star (Codex Borgia, Blatt 42) the birth of Xolotl, the god born from water, (Born of Water - Navaho) is portrayed with the snake, the sign of lightning in his hand, getting out of a shell. The lightning beam he is holding shows four extensions, the four lighning-flashes. Xolotl wears the Venus-cross on his hat, as well as a Venus-horn (Fig. 29). In the family of Arrow Keeper Edward Red Hat, the Blue Sky is handed down since generations, which is connected to the name Red Hat (head). The Blue Sky is made by melting beads to form two rectangular, teardrop like pieces of blue glass, which vary in size. One is two thirds bigger than the other. The Blue Sky starts everything and is used for the Arrow Renewal, representing the blue sky itself. The entrance of the Blue Sky Tipi is facing north. When the Arrow Keeper visited a Cheyenne battle site in northwestern Oklahoma a black cloud appeared in the sky. When a certain typ of lightning, like a blue light ball, was flashing, the Arrow Keeper / Venus said: "This is my sign." 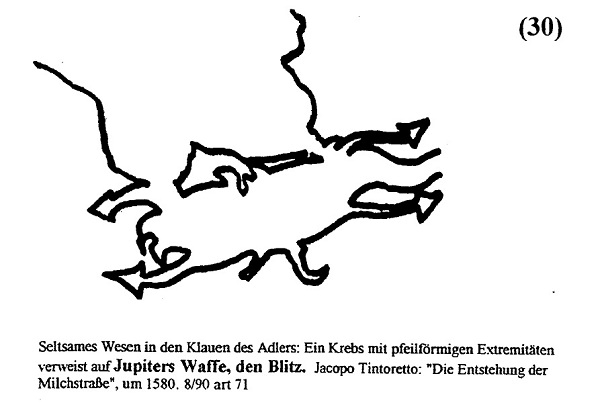 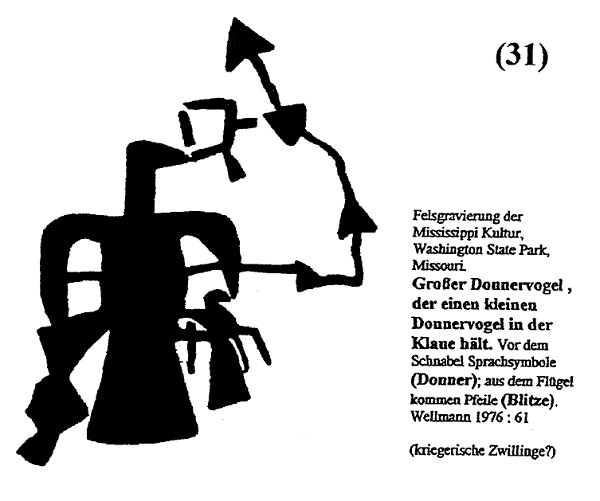 The bodies of the birds resemble the hourglass, as does the configuration to the left of the big bird. The Thunder often appears as a great bird, somewhat like an eagle, but much larger. Sometimes he is seen riding on a white horse. The thunderbird makes the thunder and lightning and storm. It goes south at the approach of winter, and returns from the warm country with the sun, bringing the heat and the rain. It shoots an arrow, but they never see it. Rarely, however, they find one of the old stone arrowpoints, which some people think is the head of the thunderbird's arrow. When the thunder began in spring, they used to fill the pipe, offer a smoke to the thunder, and ask him to take pity on them. Also shields were sacred to the thunder and lightning. The shield songs were particularly sacred; they were connected with thunder and lightning. The night owl was a great medicine helper, especially strong in matters connected with lightning. The little prairie owls are believed also to have protective power, and the Contraries wear them on the head. (Schukies 1993: 205) As the representation of the thunderbird resembles two ancient signs for Orion /Venus it should represent the "Venus out of Orion" event, too. Jupiter's / Venus's bird is the eagle. The Sky-Falcon Horus, an Egyptian thunderbird, was portrayed with the sun and the moon as his eyes (Fasching 1994: 255). 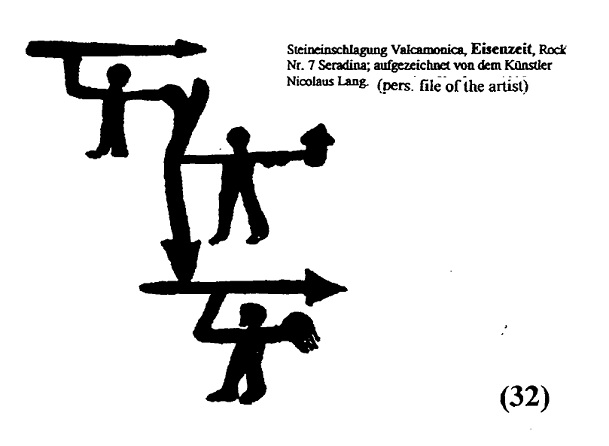 These four flashes were obviously also seen in Valcamonica, North Italy. The stone encarving was dated to the Iron Age. Quite extraordinaire are the three orbit-lines, which are partly build up of the four lightning flashes. They indicate directions of movement, but certainly not the classical "four directions". On the middle orbit two balls / suns are seen behind the walking figur. (Fig. 32) The petroglyph from San Cristobal in New Mexico, obviously combines these different elements. Two thunderbirds are facing eachother, perhaps colliding, their wingfeathers "are stylized into the symbol for falling rain" (Sims 1949, Plate I, in Patterson 1992: 91). Now it has to be noticed that one wing is made up of four lines (lightning) and the other one of three lines, perhaps orbit-lines. (Fig. 33) 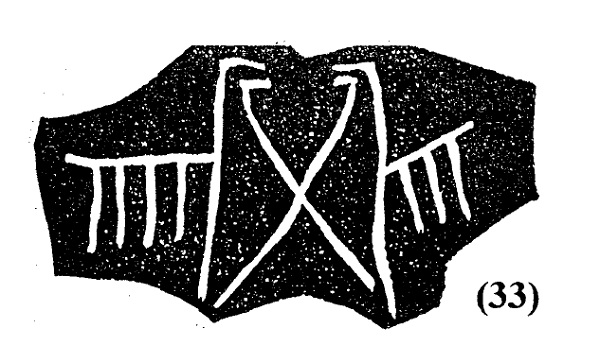 The three orbit-lines also appear on the chest of the lightning-god from Largo Canyon. (Fig. 34) As the bow is the sign of the older of the legendary Navajo War Twins, who is called Monster Slayer (Nayenezgani), Wellmann (1976:94) supposes that this figure might indeed represent him. "The War Twins.., are mayor deities in Navaho mythology. They have many names but the elder is most often called Monster Slayer and the younger Born-for Water... Dance impersonators of Monster Slayer are painted with a symbol of the bow... Supernaturals carrying the bow may in some cases represent this deity... Both the hourglass (symbol for Born-for-Water, the younger twin war god) and the bow (the elder twin) also occur apart from anthropomorphic contexts in rock art." (Schaafsma 1980: 315-31, in Patterson 1992:119) 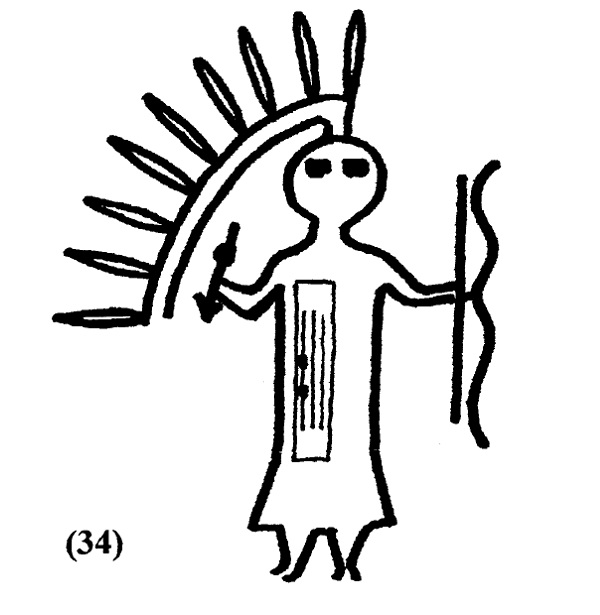 On the chest of this lightning-god - Venus - the two balls, or suns, are drawn on the outer line of the three orbits. Maybe the scene is portrayed, which Erastothenes is describing: "In the third position is the star Mars... He was chased by sidos / Venus, then Venus made up to him and enflamed him with burning passion." (Velikovsky 1950/1978: 230). 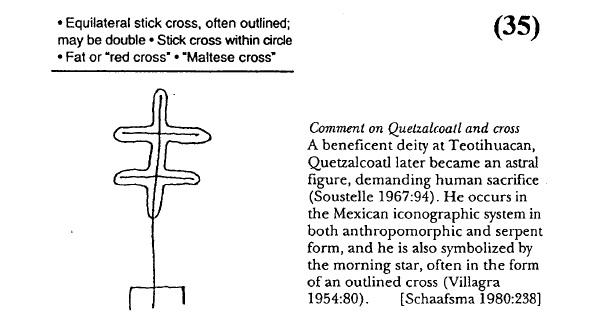 Quetzalcoatl / Venus was symbolized through different forms of crosses. In one example the double cross is attached to the middle line of three orbit lines. (Patterson 1992: 76) (Fig. 35) These three lines reappear on the lightning flash the Hopi-deity Sotuqnangu, the God of the Sky, is holding. As this Hopi-sky god wears a white masc with a horn of and on, or a hat shaped like a star, this qualifies him again as planet Venus. (Fig. 36) 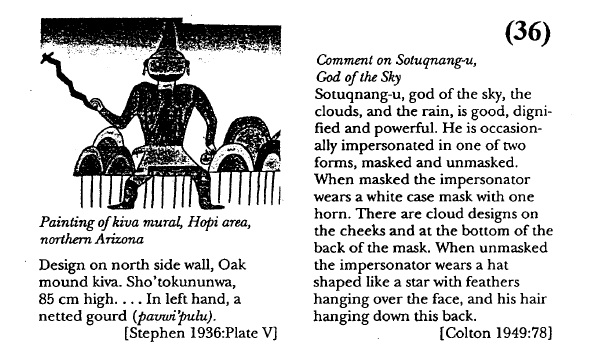 These three orbit-lines appear also on the Venus-seal and number square of Venus, from the ancient Namazgah-culture from Turkmenistan. (Fig. 37) 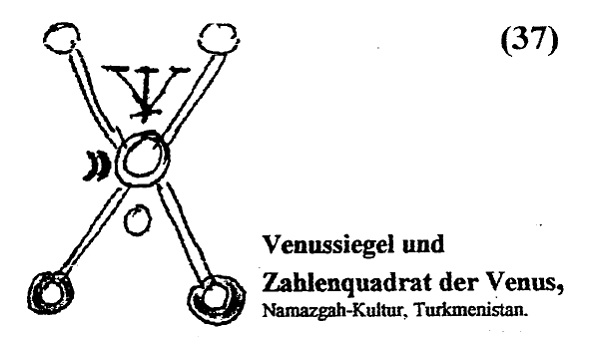 The small two moon's from the Venus-seal in Turkmenistan are the same which are encarved in Valcamonica, Italy, dated to 1100 to 700 BC Bronze- / Iron Age. (Fig. 38) 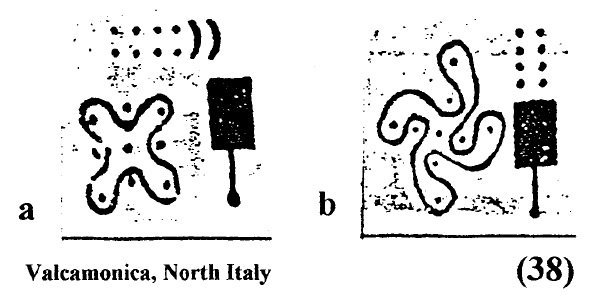 Even the dark rectangular shape in this configuration from Va1camonica reminds of the rectangular ancient Venus sign (see. Fig. 7a, b). The hourglass symbol in the middle of 38a looks like the Mayan glyph for sky (Fig. 39).

To complete the posssibilities of variations, this Valcamonica sky-hourglass starts moving and swings into a spiraling swastika (= spiral = sky-serpent), (Fig. 38 b). If the sky-sandclock is twisted a little, it becomes the isosceles cross, the Mayan glyph for Venus (Fig. 40).

These three lines do appear all over the world. In Scandinavia they are connected to the right/left arm of a giant anthropomorphic figure, who holds a lightning-lance in his other hand (Evers 1995: 87). In these three lines certainly the mythological tridents are based, the tridents of Shiva, Poseidon, or Jesus, the trident being the secret sign in early Christianity.

Shiva / Venus is represented through a vertical line, the standing beam of (red) light (lightning-beam). The earth surface, the horizon, is represented by a horizontal (blue) line (Bauer, Dumotz, Golowin 1980: 24-27). (Fig. 41)

When the lightning beam of Venus striked earth, it created its own sign, the isosceles cross, which is the sign for Venus / Quetzalcoatl. (Patterson 1992: 15,076) (Fig. 42) 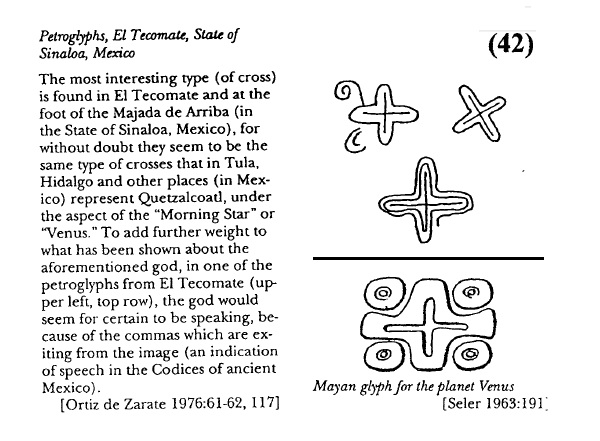