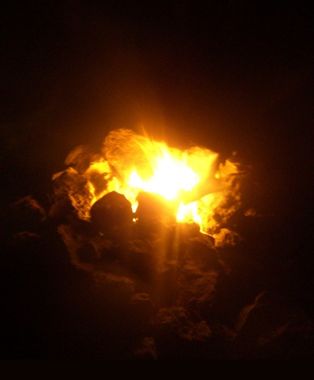 Fig. 1 Specific cyclic solar pulsations create chaos in human psychics and, as a result, habitual norms and values of civilized society collapse and the civilizations are doomed to perishing. (Photo: © Anatolii Saushkin)

The existence of pronounced solar cycle with duration of 1800-1900 years is generally recognized. This phenomenon is as real as the beating of the heart with a frequency of one impulse per second or the rhythms of our brain or 11-year solar cycle having a lesser intensity of solar activity.

It is precisely the periodic pulsations of the Sun with such a frequency that cause the appearance both of racial features and language families as well as residual mental defects, apart from epidemics.

1850 years ago Rome was under the influence of high-power impulse that shook the Antique paradigm and cleared the way for Christian one. At the same time a transition from Taoist paradigm to Buddhist one took place in Far East.

Nowadays, we also are experiencing the period of high-power pulse impact of the Sun that is eroding the paradigm of Christians in Europe and America, Buddhists in Far East and Muslims in Asia and Africa and is producing the Great Chaos inherent in such periods.

3700 years ago Middle Kingdom in Egypt represented the transition period from Ancient Kingdom to New Kingdom under the influence of such a solar impulse.

Troy, similarly to Rome, in those times was a centre of transition of Cretan and Mycenaean paradigm and “Arian” one to “Antique” paradigm.

It is worthy of note that the difference between the date of foundation of Rome and the date of foundation of Moscow (so called the Third Rome) that could be considered an up-to-date historical transitional bridge for continental Asia, makes about 1850 years. Perhaps, Troy was 1850 years older than Rome. The period from the date of the biblical Creation of the World till the Nativity of Christ can be multiply divided by these 1850 years. Such relations can suggest a profound dependence of human activity on solar cycles if the following observations also are taken into account.

As regards the multiple figure of 9000 that was mentioned by Plato in connection with the end of Atlantis we can say that, firstly, it is a mention of the most ancient event that perfectly well correlates 6-fold with our times. In those times a high-power Neolithic flare caused a chaos on the Earth that not only led to the end of hominids with a psychology hampering a flexible social mutation, apart from mammoths, but also was related to immense geological events, primarily to volcanic ones, as is typical in a less degree even in the case of 11-year solar activity, apart from epidemics – the fact corroborated by L.Chizhevski.

It should be emphasized that the volcanic explosion on Santorin which ruined Cretan civilization took place in the transition period just as in the middle of 6th millennium B.C. a substantial rising of Black Sea level was present during the similar transition as a result of a more immense event. It is worthy of note that there is a pronounced trend to weakening of geological events during such transition periods as time elapsed from the main catastrophic event that produced not only the deglaciation in Neolith. This evokes a parallel with decay of waves in water after pitching a stone, but in this case the length of waves (1850 years) remains unchanged.

However, the primary initiating geological event was very immense for the earth's crust and even the most devout people of a ruined civilization at those transition times only had to safe themselves in caves in remote continental areas and become cave-dwellers. As compared with those times, the relict decay in the intensity of processes now is evident.

The spiritual order in our up-to-date society corresponds approximately to the time of Marcus Aurelius in Rome. Though in those times the Christianity only starts infiltrating into the Roman life, there are 200 years as yet till the acceptance of Christianity as a prior state religion in Rome. And it might mean that a new prior official religion to replace the Christian one would be formed and stabilized completely in a couple of centuries.

As regards, for example, the eastern part of Eurasia, at present «homo buddhistus» ends his existence as prior religion in the territory of China and Indochina where «homo taoistus» was its predecessor.

This 1850-year cycle can be called simply Stratum (or Supersaros), within which a specific religious paradigm exists.

The existence of this historical human dependence on specific solar activity makes us hypothetically suggest that a global historical scheme of cyclic development for main areas of the world might be of the following form: 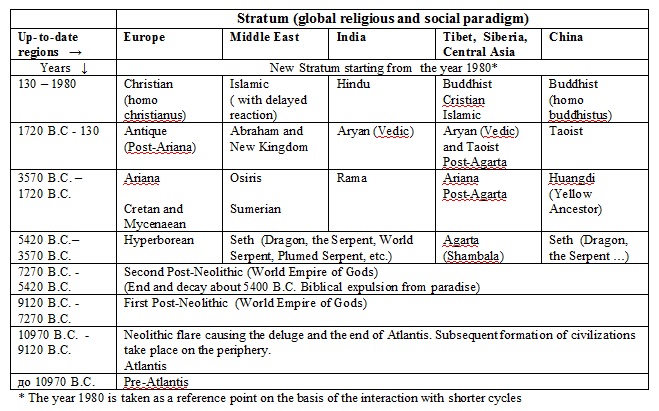 Strange as it may seem, none the less, Christians and Buddhists received their fundamental teachings from a general source in archaic areas adjacent to Indian Ocean which were less affected during the transition period 1850 years ago. Social changes in areas adjacent to Atlantic and Pacific Oceans were more dramatic than in latter areas during the transition period. That is why the primary inflow of spirit after deflecting through Jews (Hebrews) transformed into the Christian religious paradigm in the West of that area and afterwards spread to north-westwardly. At the same time, the Buddhist religious paradigm after deflecting through Hindus moved eastwardly to China.

Besides, both Hebrews and Hindus found themselves devoted to their ancient roots. The vacuum between the paradigms of the former spiritual paradigms was filled by Islam as result of a delayed reaction of the most archaic area adjacent to Indian Ocean to the inflow of new spirit in the first centuries A.D. that created a rigid religious paradigm which transformation is accompanied by the most dramatic social events during our transition period.

America and Australia are in an area of prolonged inertial extinction of civilizations. This is evident from the fact that pre-Columbian civilizations of Central America carry relicts that became extinct in Eurasian and North-African regions several thousand years ago.

The period of dramatic rise in the intensity of cyclic impact takes place within several decades. A sharp increase in the resonance frequencies associated with the brain activity provokes the greatest chaos in human society. A rapid mass degradation or loss of life in those who has a profoundly fixed (psychopathic) consciousness and the consciousness expansion in those having a relatively harmonious one is typical during those times. An ultimate stratification of society increases the human pressure to the highest degree.

The development of religious and social paradigm takes place just about as follows:

At the beginning, many people start feeling that they are incapable intellectually and emotionally to live within framework of dying social and religious paradigm (even in the secondary effects) and those who have more harmonic and honest character start realizing that the new spiritual paradigm becomes more comfortable spiritual means. In order to meet the call of the times they are forced to become ‘passionary’ as according to L.Gumilyov’s definition.

Those who are capable to apprehend the new state of the world generated by cycles of the Sun and the planet (such a cosmic psi-factor) acquire the higher qualities including paranormal ones. I.e. there exists a involuntary selection for the future clergy (that could be called clerical core of the stratum) by means of passionary behavior. Those passionary individuals create a fervent faith – a fundamental element for the salvation of humanity.

An immense supply of passionarity in the bearers of the new spirit during an initial period – after reaching the maximum within few decades - starts dying down according to the curve that L.Gumilyov outlined for smaller cycles. In time, the clerical core degenerates - “passes the baton of prior power” – into the noble (warrior, knightly) core that “cements” the human society henceforth. At a time like this, the feudal aristocracy is a core of ruling system. The clergy becomes more and more a formal element of the society.

The subsequent materialization (damping of resonance frequencies) of social paradigm results in strengthening influence of the third estate (merchant, entrepreneurial, banker, etc) - which we call it now capitalism – that drives step by step the clerical and noble estate into the background. The stage of materialized culture gets underway. Subtle spiritual liaisons are replaced with products of external human “genius” in art, science, technological area. Commodity-money relations become a dominating way of life. The degradation of spiritual qualities is in full swing as scientific and technological achievements replace the loss of spiritual power.

However, the progressing individualization causes a rise in social contradictions. At a certain stage of the stratum, the capitalistic element start ceding the leading role, firstly in peripheral areas, to the “proletarian” element (the forth, base estate) that at the initial stage is capable only to exist in the form of totalitarian dictatorships (predominately, communist, fascist, etc. in Christian Stratum). It is precisely within such an element a new paradigmatic world outlook start emerging as it took place in Rome in the form of the Christianity or, in our times, in the form of new.

Primarily, the “proletarization” takes place in peripheral continental areas of cultural (religious) paradigms. It comes against the background of an ultimate development of military technologies.

Whereupon, an “ochlocratic” element - the mixture of dominating criminal groups and a barbarizing forth estate - begins prevailing accompanied by the process of impoverishment and dereliction.

However, we shall hope that the surge of new paradigmatic stratum will put an end to that process. Unfortunately, it will involuntarily entail a “Great Chaos” to be a starting point for forming new spiritual and noble cores as well as for forming a new estate of enslaved people (in the days of old – slaves or serfs) who, in all respects, are slaves of outlook inertness or heredity, but who can be made relatively free by means of developed technological means. 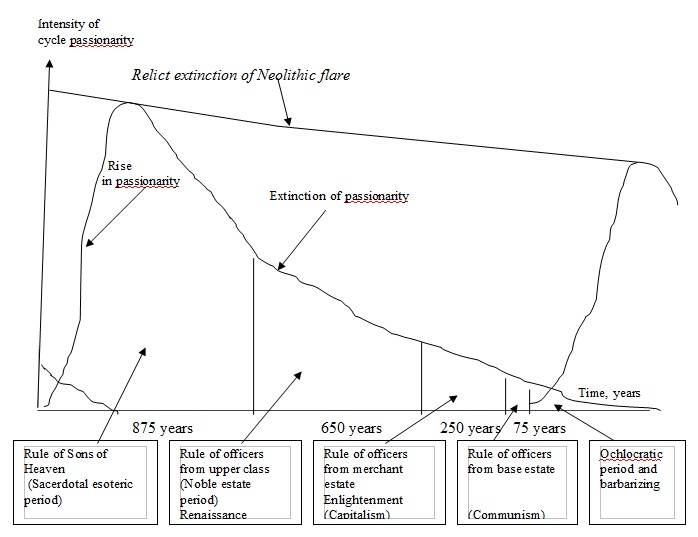 Fig. 2 Stages of 1850-year cycle according to Confucius

It should be noted that developmental delay (inertness) in the transition periods is typical for highly materialized paradigms, especially in peripheral areas.

Now, one can consider a comparative development of such religious paradigm as Christianity in Western Europe.

An absolute rule of papacy existed approximately according to Confucius scheme. Then, it was replaced by the rule of noble estate with the emergency of Holy Roman Empire and the schism with Greek Orthodox Church. Following which, at the end of Renaissance the third estate in the form of capitalism entered the paradigmatic scene by using Protestantism, Lutheranism, Evangelism, etc. And, in the end, the above mentioned more continental countries with the rule of officers from base estates emerged by using corresponding ideologies remaining, nevertheless, in a more materialized form within the same paradigm.

It should be drawn a parallel between ancient Rome and Russia. Rome was a state formation that provided the transition from Antic paradigm to Christian one. At present, Russia has a challenge to provide the transition from Christian paradigm to a new paradigm that will be given a name before long and which harbingers in the form of Internet, television, computer communications technologies, mobile communication, etc. evidence that in the future stratum those will replace such human attributes as Church, Holy Writ, prayers, confessions, etc.

At the same time, it should be noted that the Western Europe, and first of all, Germany will play the role of future “Byzantine Empire” in the new stratum owing to specific archaism to be considered below.