PHARAOH MUST BE TURNING IN HIS GRAVE 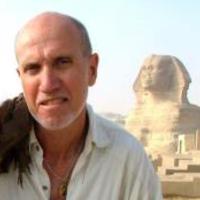 The term 'Kangaroo Court' is partially defined as "A kangaroo court is a judicial tribunal or assembly that blatantly disregards recognized standards of law or justice". Yesterday the Criminal Court of Giza in Cairo has given the world a demonstration of this term by slamming a five years jail sentence on six Egyptians and three Germans as if they had committed the same crime all together, all with one hand. And what exactly was this crime? The 'stealing of artefacts from the Great Pyramid of Khufu'.

But how was this allegedly heinous crime undertaken?

Are we to imagine a cleverly organized gang who had plotted the theft of the century, wearing balaclavas and secret digging a tunnel at night into the Great Pyramid? And what 'artefacts' did they steal? Was it the golden sarcophagus of the Pharaoh? Or a treasure crate full of inlaid precious stone and priceless amulets? Well, not quite.

On the 17th April last year three Germans and their Egyptian tour guide presented themselves at the foot of the Great Pyramid. They showed the security police a special permit which entitled them to a two hours 'private visit' inside the monument. This special permit had been obtained a few days earlier after paying the official fee of 7000 Egyptian pounds (about $ 1000) to the Ministry of Antiquities (MOA). The Germans were told that they would be accompanied inside the Pyramid by two inspectors from the MOA and two security guards of the Pyramid area. The Germans had brought along a professional video camera for which they had purchased a valid 'camera ticket' at the entrance of the site. They had also brought small tool kit containing a scalpel and tiny glass boxes to retrieve a few milligrammes samples of black soot from the ceiling beams of the King's Chamber and red ochre paint from the so-called Relief Chambers which they wanted to have tested in a laboratory in Germany.

Knowing that a ladder would be needed to extract those samples, the Germans had asked their Egyptian tour operator to arrange with the MOA that a 'five meters ladder' be provided. This apparently was approved, since a five-meters ladder with a three-meters extension was waiting for them inside the monument. The ladder was first placed inside the King's Chamber and fourteen samples, a few milligrammes of soot, were taken by moving the ladder fouteen times inside the Chamber. The ladder, now with its three meters extension, was placed against the wall outside the King's Chamber to allow two of the Germans to climb and enter a narrow tunnel in order to reach the Relief Chambers. There, in the topmost chamber known as 'Campbell's Chamber', one of the Germans retrieved a few milligrammes of red ochre paint from ancient graffiti or 'quarry narkings' apparently drawn by the ancient workers who built the Pyramid. After which the Germans returned to Germany and gave the samples to be tested in a laboratory in Dresden.

So convinced that the taking of these samples had been approved by the MOA as their Egyptian guide assured them and as indeed made implicit by the presence of the MOA inspectors and Security personal, the Germans posted on the Internet the video film they had taken inside the Great Pyramid which showed how and where the samples had been taken. To their surprise, the MOA promply accused them of 'vandalizing' the Great Pyramid and of 'stealing the Cartouche of Khufu', an oval shaped sign containing the name of the pharaoh painted in red ochre as part of the so-called graffiti. Amazingly as it seems, these accusations were hastily made before an investigation was made to inspect the scene of the alleged crime in Campbell's Chamber.

When indeed an inspection by the MOH was finally carried out in December 2013, a full five months after the alleged crime had been committed, it was found that the Cartouche of Khufu was still there untouched. Careful examination showed four small scratches on the rim of the Cartouche implying that samples had indeed be removed. However, an extensive investigation proved with official photographs that these four scratches were already on the Cartouche since at least 2006. This was during the time when Zahi Hawass was head of the Antiquities and Director-General of the Giza Pyramids. It is now know, through photographic evidence, that the samples from the Cartouche were taken sometime between July 2004 and December 2006. Further investigation has proved that Hawass had indeed carefully examined the Cartouche on several occasions before 2004 and after 2006, but failed to report this crime.

All this evidence was presented in the Criminal Court during the trial of the six Egyptians and the three Germans, yet in spite of these attenuating circumstances, the judge slammed five years jail sentence on all of the accused. The judge, however, was compelled to refer Zahi Hawass to the Attorney-General regarding the "Cartouche Case", as it is now called in the Egyptian media. We may well be justified to wonder, however, if justice will finally be done or whether, yet again, we will have another demonstration of a Kangaroo Court.